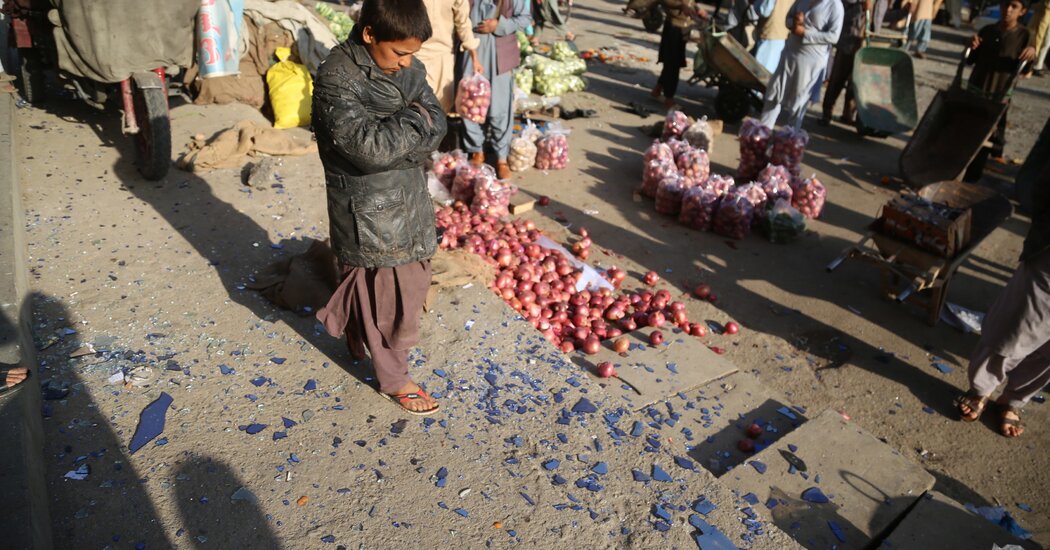 The next report compiles all important safety incidents confirmed by New York Instances reporters all through Afghanistan for the month. It’s essentially incomplete as many native officers refuse to substantiate casualty info. The report contains authorities claims of rebel casualty figures, however typically these can’t be independently verified by The Instances. Equally, the stories don’t embody Taliban claims for his or her assaults on the federal government until they are often verified. Either side routinely inflate casualty totals for his or her opponents.

Not less than 64 pro-government forces and 17 civilians had been killed in Afghanistan the previous week. The deadliest assault occurred in Helmand Province, the place the Taliban attacked a army base referred to as Waziromanda close to Lashkar Gah, the provincial capital, killing 10 troopers and taking 12 others prisoner. Insurgents captured the bottom and seized all weapons and tools. In one other incident in Helmand, a automotive bomb focused a police outpost in Nawa District, killing eight troopers and wounding 12 others. In Baghlan Province, a army convoy was attacked by the Taliban within the Hajda Kotal space of Dahana-e-Ghori District, killing 5 troopers and wounding 4 others.

One civilian was killed and one other was wounded in an assault by unknown gunmen within the Second Police District of Herat metropolis, the provincial capital.

A police officer was shot and killed by unknown gunmen within the middle of Karokh District.

The Taliban attacked a safety outpost in Pul-i-Khumri metropolis, the provincial capital, killing 4 cops and wounding three others.

The Taliban shot and killed a police officer within the village of Pir-e-Ghaibi of Qadis District.

Three members of a pro-government militia had been killed and one other went lacking after a Taliban assault on a safety outpost within the middle of Pashtun Zarghun District. An extra 5 militia members had been taken prisoner by insurgents.

The Taliban attacked a army convoy within the Hajda Kotal space of Dahan-e-Ghori District, killing 5 troopers and wounding 4 others.

The Taliban attacked a army base in Eshkamish District, killing one police officer and wounding 4 others.

5 cops, together with an organization commander, had been killed and eight others had been wounded throughout a Taliban assault within the Khwaja Band Kashan village in Ishkamish District.

The pinnacle of the service division within the Nationwide Statistics and Info Authority was shot and killed by unknown gunmen in Qala-e-Wazir space of Paghman District. Police have launched an investigation.

A roadside bomb exploded close to a police car within the Second Police District of Jalalabad, the provincial capital, killing two civilians and wounding three cops and 15 civilians.

4 cops had been killed and three others had been taken prisoner in a Taliban assault within the Fifth Police District of Kunduz metropolis, the provincial capital.

One Afghan commando was killed and three others had been wounded within the Ostaming village of Imam Sahib District throughout a army operation.

The Taliban shot and killed a former police officer within the village of Kanaqol in Aab Kamari District.

One soldier was shot and killed by the Taliban within the village of Shotor Gardan in Qala-e-Naw, the provincial capital.

Unknown gunmen shot and killed a police officer in Baghlan District. The attackers managed to flee from the realm.

A bike was hit by a roadside bomb within the middle of Panjwai District, killing one civilian.

A passenger bus was hit by a roadside bomb in Maiwand District, on the freeway connecting Kandahar to Kabul, killing 4 civilians and wounding 13 others.

The Taliban attacked a safety outpost in Ghazi Baba space of Surkh Rod District, killing 4 cops and seizing their weapons. Native authorities claimed that 9 Taliban fighters had been additionally killed within the clashes.

The Taliban attacked a army convoy within the village of Kharistan in Firoz Koh, the provincial capital. One soldier was killed within the clashes. Native authorities claimed that two Taliban fighters had been additionally killed.

The Taliban attacked a army base referred to as Waziromanda close to Lashkar Gah, the provincial capital, killing 10 troopers and taking 12 others prisoner. Insurgents captured the bottom and seized all weapons and tools.

A automotive bomb focused a police outpost in Nawa District, killing eight troopers and wounding 12 others.

A army truck was hit by a roadside bomb in Sabz Sang space of Qarabagh District, killing one member of the territorial military and wounding 4 others.

The Taliban focused a army convoy with a automotive bomb in Panja Chenar space of Paghman District, killing three safety pressure members and wounding 12 others.

The Taliban attacked a safety outpost within the village of Rood-e-Gaz in Adraskan District, killing one police officer and taking three others prisoner.

A military truck was hit by a roadside bomb in Qargha space of Paghman District, killing one soldier and wounding three others.

Unknown gunmen shot and killed the son of Juma Khan, a member of the provincial council within the Pole-e-shahrawan space of Taloqan, the provincial capital. The attacker was in a position to flee from the realm.

The Taliban attacked two safety outposts within the Gulsalk space of Chapa Dara District, killing 4 troopers and taking 4 others prisoner. Two troopers are lacking. The Taliban captured one of many safety outposts and burned it down. A Humvee was additionally blown up by a bomb.

A car was hit by a roadside bomb in Sarkar space of Lashkar Gah, the provincial capital, killing six civilians.

Reporting was contributed by Najim Rahim and Fatima Faizi from Kabul, Zabihullah Ghazi from Jalalabad, Farooq Jan Mangal from Khost, Taimoor Shah from Kandahar and Asadullah Timoory from Herat.